Here’s something you don’t see very often. A town actually remove or relax a smoking ban.

Late last month, Casper, Wyo., removed its smoking ban on bars because some bar owners complained to the city that the ban was hurting their business (the ban is still in place in restaurants.).

Smokefree advocates are now collecting signatures for a voter referendum to restore the smoking ban. Not sure how such a referendum would do in such a Libertarian/conservative state like Wyoming, but it would be interesting to see.

Wyoming has no statewide smoking ban and likely will NEVER have a statewide smoking ban as it is one of the most anti-regulation, conservative states in the nation. I know Cheyenne and Laramie have smoking bans, and Jackson, Wyo., attempted to implement a smoking ban, but that ban was tossed by a Wyoming court because the wrong agency implemented it (a county health board). Casper is the second-biggest city in Wyoming next to Cheyenne.

Interesting, bar owners claimed the ban hurt their business, but according to this Casper article from April, there didn’t seem to be any effect in the bars. I’ve always thought some bar owners exaggerate some these claims, but of course, without looking at their books, who knows? At the very least, with the ban in place for only two or three months, business owners and more importantly, the city council, did not give the ban a legitimate chance.

I’ve seen this happen before. It only takes a handful of “squeaky wheels” to get a small town government council to respond (I’ve seen three or four loud parents talk school boards into sneaking intelligent design into their curricula, etc.). Again, I’m not that dogmatic about bar smoking bans, but I hate to see a small town council NOT give their new regulations a chance to succeed, and I hate to see a small town council cave to a small  and likely loud group of complainers.

Interestingly, they held a referendum to get rid of a smoking ban in Springfield, Mo., and Missouri is a pretty conservative, anti-regulatory state … the referendum failed with the pro-ban side getting 64 percent of the vote.

I wish the petitioners luck and I’ll be keeping an eye on if it succeeds.

I noticed this beginning a couple of months ago — a sexy new ad campaign for an e-cigarette called Blu.

I first saw an ad on TV and was shocked to see a cigarette ad on TV, then realized it was for an e-cigarette. However, it was using the same techniques used in old cigarette ads — hip, young, sexy people using their product looking cool.

The TV ad features B-movie actor Stephen Dorff (remember him as the evil vampire in “Blade?”) talking about how e-cigs have freed him from being a “human ashtray” and allows him to “enjoy smoking without infecting the people around me.”

You’ve probably seen Dorff in a bunch of magazine ads. Sports Illustrated and many other magazines have them every week. Cool, sexy-looking, using retro B&W photography (with the Blu e-cig standing out in blue). This Business Insider article is pretty critical of the whole campaign for employing ancient cigarette advertising techniques.

Here’ is Joe Rogan’s really funny take on the Dorff commercial, mashing it up with a really bad Brad Pitt Chanel No. 5 ad to create the “douchiest ad ever.”

The Blu commercials are very careful not to tout their product as an aid to quitting smoking. They’re more about how to avoid smoking. E-cigs don’t have a good reputation for helping people quit. Every single person I’ve ever talked to who has used them has told me they were no help at all. (If you don’t know much about e-cigs, they’re not cigarettes at all, they give the user a little jolt of nicotine-laced steam to curb their nicotine cravings. Relatively harmless and totally harmless to people nearby.)

What I noticed is that Blu and other e-cig companies are using techniques mastered by cigarette companies — make their product appear sexy by using young, smart-looking sexy people to promote the product.

Now, e-cig ads from a company called Ever Smoke

Yoiks, I can only imagine the comments at the old Smokers’ Club (I haven’t a clue if that is even around anymore. It’s been years since I looked.) on this story!

According to an Ohio State University researcher — between absenteeism caused by added health problems and lost productivity due to smoking breaks, smokers cost companies on the average of $5,800 a year and possibly up to $10,000 a year.

Let me do some math on that smoking break thing. Say a smoker, not too heavy of a smoker, takes four smoking breaks during an eight-hour shift. Say each break takes 10 minutes. That’s 40 minutes a day in lost productivity. That’s 200 minutes a week. That’s 10,000 minutes a year.

Here’s the OSU numbers. Pretty close to what I did in my head:

The OSU researchers’ calculations show low productivity due to excess absenteeism costs employers, on average, $517 a year per smoking employee and working while sick cost $462. Smoking breaks tack on $3,077 and excess healthcare another $2,056.

There is a LOT of data showing smokers increase everyone’s insurance premiums, which is why many employers now add a premiums surcharge for smokers and some companies won’t hire smokers, period. So, I think that $5,800 a year number, while it sounds surprising, is totally plausible.

The study was published in Tobacco Control.

This is an interesting story that a lot of people are misinterpreting.

Starbucks announced this week that they are banning smoking within 25 feet of their entrance ways. This sparked a lot of heated debate online about how they can’t ban smoking on sidewalks and streets, etc.

Well, not so fast. Basically, all Starbucks is doing is banning smoking within its own outdoor seating areas, regardless of what state laws are. Some states already ban smoking within 25 feet of a business, other have no rules about outdoor smoking. Starbucks is saying, “we don’t care. You’re on our property no smoking.” They can’t actually ban smoking on a sidewalk or street.

This could still cause some headaches for them. I’ve seen restaurants get into knockdown drag-outs trying to convince patrons they can’t smoke on an outside deck. And I’ve seen a brewpub that is fighting with a bar next door because all the bar’s customers go outside to smoke right in front of the brewpub. 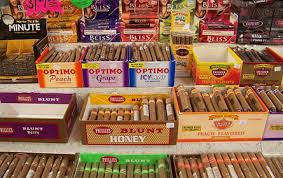 The American Cancer Society is pushing to limit the sales of candy-flavoured tobacco products — cigars, chewing tobacco and loose tobacco leaf for water pipes — mostly because it’s well-known that these sweetened products are marketed not-so-subtly to teens. These sugary tobacco products are also suspiciously cheap (as in trying to be the gateway tobacco for kids.).

Honestly, I didn’t realize they made candy-flavoured chewing tobacco. I knew about Swisher Sweet cigars.

The state couldn’t ban candy-flavoured cigars, but they could ban them from convenience and grocery stores and mandate that they could only be sold in tobacco shops.

I have no idea if this will go anywhere, but if it does, New York would be the first state to restrict the sales of these products. New York is one the leading states in fighting tobacco. The state’s tobacco taxes are among the highest in the nation and New York City has the toughest anti-smoking laws in the country (partly because Mayor Michael Bloomberg is a health nut and anti-smoking zealot; I’m not sure I’m 100 % comfortable with all his proposals and tactics — such as trying to ban large sodas.)

Haven’t posted in a while. Have three interesting updates.

The first is a smoking ban in all places — Russia — one of the heaviest smoking countries in the world.  It’s not a particularly strict smoking ban — no smoking in hospitals, on public transit or in schools (nothing about restaurants or bars).

Not very strict, but a big deal in a country where a whopping 55 percent of men smoke daily (compared to about 25 percent in most Western countries).

Bans were also put in place by Russia on advertising and marketing of cigarettes. It affects this Soviet-era cartoon of a smoking wolf named Wolf the Hooligan, which can only be shown at night now because the main character chain smokes.

(Is this music from Speed Racer?)

With the ban, Russia joins most of Europe in having some sort of smoking bans (I believe some Balkan and Eastern Europe countries still have no bans).

As you know, I’m not that dogmatic about smoking bans, but I accept them as part of the changing world. I feel more strongly about the ban on marketing and advertising.

A great article from MSNBC on the latest country to have a smoking ban. Some people are happy, some are mad.